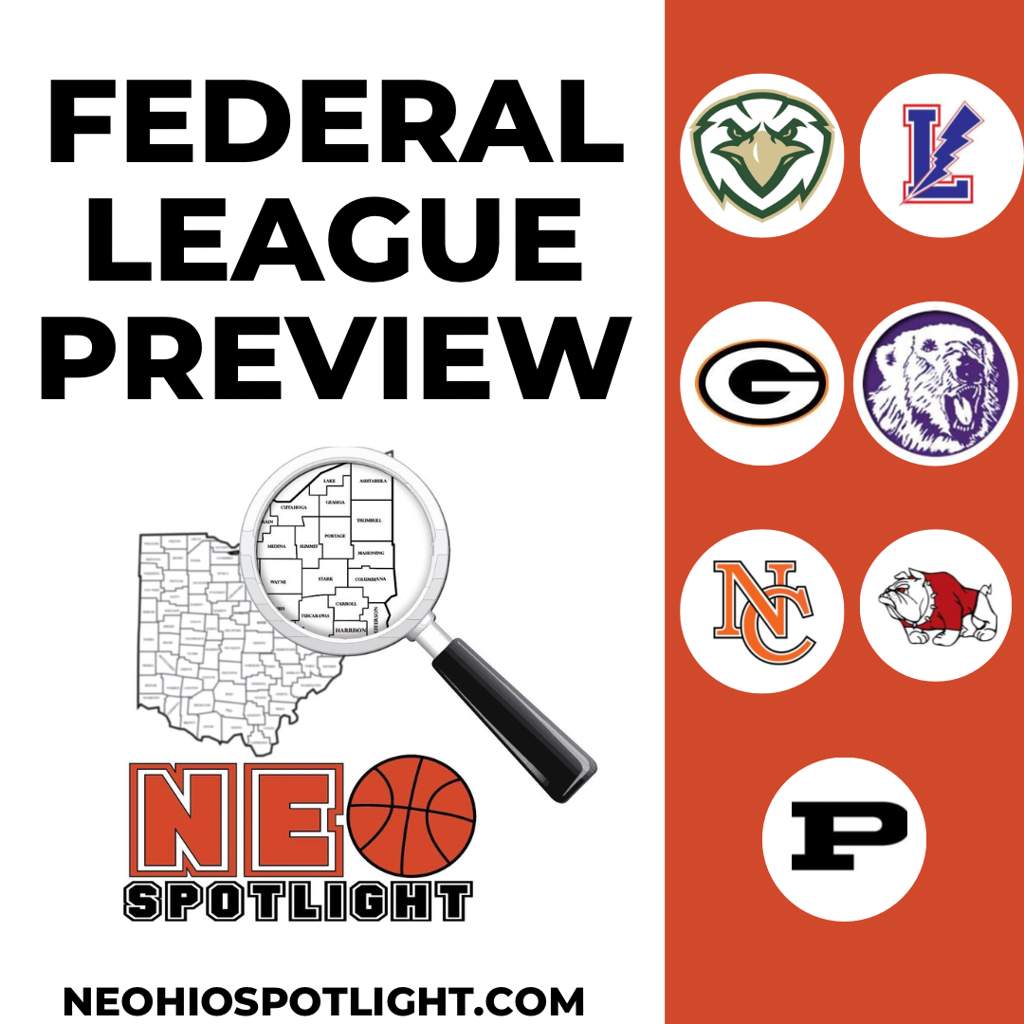 The Federal League has proven to be one of the state's most competitive conferences year in and year out as each of the seven programs have culture, unique playing styles, and loyal fanbases.

A year ago, Green pulled away late in the season to secure their second league title in the last three years. Coach Kinsley and company will be looking to repeat in a race that could come down to the final week of the regular season. Canton McKinley finished just two games out of first place and are regarded as one of area's top teams coming into the new season,  earning the spot in the league's preseason poll.

The league lacks the strong group of seniors that we've been accustomed to seeing but it is in good hands as a plethora of young, talented stars look to make names for themselves.

Coaches weren't permitted to vote for their own program

Voted on by the Head Coaches

Player of the Year

Coach of the Year

The GlenOak Golden Eagles will feature a trio of talented guards in their backcourt as junior Ja'Corey Lipkins will be joined by sophomores Bryce Broom and Kenny Scott. Senior Ben Davis is the other returning starter from a year ago and will be heavily relied on for his toughness and leadership.

"We're going to depend on some young guys, but those young guys are really good," Coach Rick Hairston said about his team.

Lipkins, who already holds an offer from Youngstown State, burst onto the scene last year with his scoring ability. The lefty has a solid frame, a shifty handle, and is capable of scoring in bunches.

Bryce Broom adds a different dynamic to the team with his feel and high basketball IQ. His unselfishness and ability to impact the game without scoring will allow both Lipkins and Kenny Scott to flourish in their roles.

The Eagles are coming off a 10-12 (3-9) season but the future is looking bright in Plain Township. Junior Jalen McElroy, sophomore Reece Zerger, and freshman Issa White will look to be contributors as well on a team that could be dangerous come postseason.

Coach Kinsley and the Green Bulldogs are heading into the new season as defending champs but the challenge of winning the league will look much differently this year without Zack Oddo (Walsh) and Trey Martin (Ashland).

While this team still has some question marks, there is no shortage of talent on Boettler Road. Sophomore Nikola Bundalo, who saw some rotational minutes a year ago, is "one of the most talented" prospects to ever come through the program according to Kinsley.

The 6'8 forward has a unique skillset and an immeasurable amount of long-term upside. He holds offers from Kent State and Bryant University.

Junior Brady Rollyson committed to Ohio State's baseball program just last month and he'll be one of the league's most productive players this season. The 6'2 forward is a tough, physical slasher that can finish through your chest or step out and shoot it with a lefty stroke.

Jarrett Taylor will be asked to step into an even bigger role for his junior season while the guard duo of Antonio Martin and Lucas Bitong will look to prove themselves on the varsity level.

The length, athleticism, and toughness of the Bulldogs should allow them to be near the top of the league when it comes to rebounding and points allowed.

Returning Starters:  2023 Wesley Collins G
In the Rotation: 2023 Mason Bille C, 2023 Hunter Ross G, 2023 Blake Ward F,  2024 Rowan Ellis F, 2024 Emmett Sommers F, 2024 Grant Walker W, 2025 Logan Ash, 2025 Zac Braucher G, 2025 Crew Cain W, 2025 Angelo Granito, 2025 Robert Oster F
The theme of the league this year is youth. Coach Bluey and a tetrad of seniors will look to show the ropes to a talented group of sophomores and juniors.
"We've got a lot of young kids," Coach Bluey said during a Fall open gym.
He expects at least four sophomores to crack the main rotation and he has sang their praises throughout the preseason.
Senior Wesley Collins is the only returning starter from a team that finished 17-5 last season, picking up crucial non-conference wins against Cleveland St. Ignatius, Louisville, and Youngstown Boardman.
Since Collins has taken over as the team's starting point guard, the Vikings have a combined 33-8 record along with a district title. Coach Bluey described his floor general as a "winner" and a kid who has made "drastic improvements" over the last six months.
Fellow senior Blake Ward is a versatile piece due to his ability to stretch the floor and rebound the basketball at a high level. Mason Bille wiIl be one of the bigger players in the league and gives the team a much needed low block threat.

Last season was filled with highs and lows but Coach Debevec and staff finished in a three-way tie for third place despite a slow start. This year's team will feature a lot of unfamiliar faces.

"We have a good mix of seniors and underclassmen," Coach Debevec said when asked about his team's make up.

Senior Owen Woolbert is the lone returning starter and he will be asked to carry a large piece of the scoring load this year. Woolbert is a 6'7 run and jump athlete that is not only one of the league's best bigs, but he's also regarded as one of the top volleyball prospects in the Midwest.

Mitch Finefrock, a deadly three-point shooter, is joined by fellow sophomore Kyle Monterrubio as the two look to be key contributors this season. The 6'3 Monterrubio is a talented slasher that plays with rhythm, pace, and can also be utilized as a primary ballhandler.

"Our expectations aren't going to change. These kids are going to carry the tradition on," Coach Debevec added in regards to what he expects from this group.

Anthony Fuline is a heady lead guard that will look to run the show. Senior James Bossart will add toughness and versatility in the frontcourt thanks to his ability to play inside-out. This group already appears to have good chemistry and they should be a much improved shooting team.

Returning Starters: 2023 Caleb Collins, 2023 Landyn Roth, 2024 Chance Casenhiser G
In the Rotation: 2023 Josiah Brown F, 2023 Joe Herrick C, 2023 Tony Maricocchi G, 2023 Dylan Snyder G, 2023 Gavin Swope W, 2024 Josh Coffield F, 2025 Charlie Christopher W
The Blue Streaks return six of their top eight from a team that won 15 games just a year ago. This year's group lacks the size on the interior but Coach Tom McBride seemed excited about the idea of small ball.
"We're going to be able to go a little bit and do some of the things we used to do", McBride said when discussing how this team will win games.

Junior Chance Casenhiser, one of the league's top players, will be the catalyst for their offense. Casenhiser is a downhill guard that is wired to score the ball, using his wheels to really push the tempo and apply pressure on the defense. He averaged 14.6 points per game as a sophomore.

Gavin Swope, who was the sixth man in 2021-22, is joined by fellow seniors Tony Maricocchi, Caleb Rollins, Landyn Roth, and Joe Herrick. Sophomore Charlie Christopher, a two sport standout, transferred over from Lake Center Christian and is a knock down shooter.

Maricocchi is a solid role guard that will allow Casenhiser to play off the ball, freeing him to come off of some different actions and looks that weren't available a year ago.

"He's worked harder than anyone in this gym," Coach McBride said in regards to Maricocchi's improvement over the last 6-8 months.

Lake will be a fun group to watch on the offensive side of the floor but they'll need to find ways to control glass in order to exceed the 15-win mark that was set last season.

The Bulldogs enter the 2022-23 season with high expectations among the league coaches, earning the number one spot in the preseason poll. Coach Vlajkovich and staff finished in second place just a year ago and they return a strong core of guards, led by Jahlil Graham who was voted the preseason Player of the Year.

This year's group features a unique combination of youth and experience as the senior core of Graham, Tra'Sean Foster, Connor Welden, and Antonio Williams look to mold a talented group of sophomores.

While Graham and Foster will undoubtedly be one of the league's top backcourts, you can expect junior Jecis Moody and sophomores Reid Sims and Dante McClellan to be in the mix as well.

Sims is a smooth, crafty scorer that will be one of the team's most reliable catch-and-shoot threats. McLellan, also a standout on the gridiron, will add size and physicality on the inside.

Coach V has always spoken highly of this group's toughness and their ability to play as a collective unit. "Not one of these guys has missed a Fall workout", Vlajkovich said when asked about his experience this preseason.

Expect the Bulldogs to carry over this mindset into the season as they have a shot to be a serious player come February.

Coach Mickey Sabin ('92) is entering his first season at his alma mater following two years at Tuscarawas Central Catholic. He plans on bringing over his uptempo style to a team that has some sneaky talent.

"We've got a lot more up top than people realize," Sabin said in regards to his roster.

Senior Joel Brown is one of the league's top returners and his athleticism in the open floor should be a seamless fit for the new look Panthers. Sophomore Luke Wolf received some high praise from coaches within the league and is a player who split time between JV and Varsity a year ago.

Joining Coach Sabin in Massillon is his son Zander, a 5'9 guard that averaged 22.7 points per game last season at Tuscarawas CC. Zander is a gym rat that adds leadership and a big-time scoring punch to a young, inexperienced squad.

Senior Zyiad Perry and Sophomore Nehemiah Toles are two players who could blossom over the course of the year and make an impact with their athleticism.

Before he left for a board meeting, Coach Sabin ended our conversation with this nugget: "I want to compete for the league."

Player of the Year:

Coach of the Year: